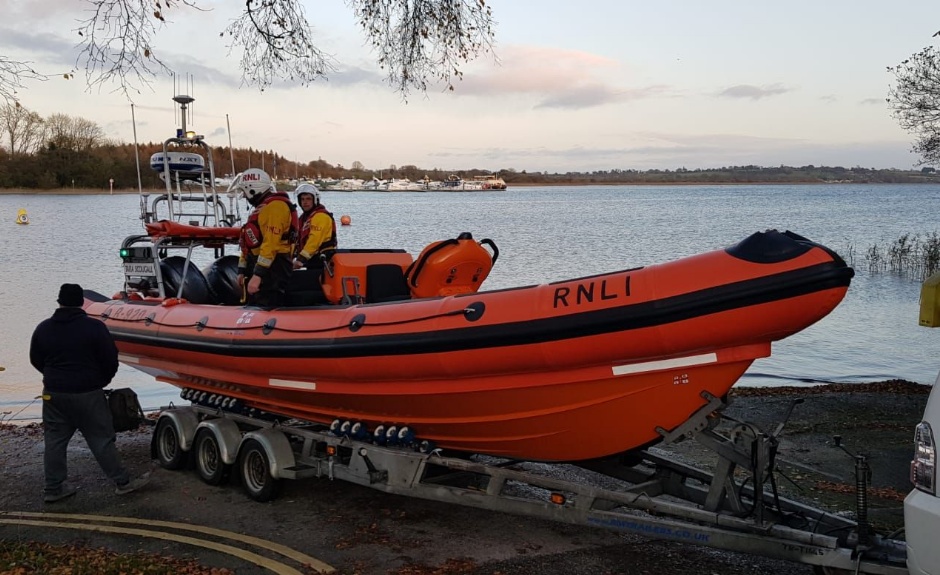 A new Atlantic 85 class lifeboat, Tara Scougall, has gone on service at Lough Ree RNLI. The lifeboat which arrived at the Coosan Point lifeboat station on Tuesday 12 November 2019, replaces The Eric Rowse which has been used for rescues and to save lives on Lough Ree since August 2014.
Photo and press release courtesy of RNLI/Sarah Bradbury

James Scougall sends his huge appreciation for all the support, help and fundraising; £214k was raised. The naming ceremony will take place next year.

The new lifeboat has been funded through the fundraising efforts of James Scougall in memory of his late wife Tara Scougall. James and his family wanted a lifeboat station with a strong sense of community and felt that Lough Ree was the perfect choice.

The Tara Scougall will be officially named at a special naming ceremony and service of dedication at Lough Ree Lifeboat station next year.

In her 5 years of service on Lough Ree, The Eric Rowse was launched on service 292 times, with its volunteer lifeboat crew assisting a total of 716 people.

The new lifeboat, an Atlantic 85 design, allows room for four crew members, and it has additional equipment and more advanced features than it’s predecessor, the Atlantic 75 class lifeboat, which it replaces.

The lifeboat is powered by two 115 horsepower engines and has a stronger hull and greater top speed of 35 knots. The added radar allows the crew to operate more effectively in poor visibility and there is also VHF direction-finding equipment.

The vessel also has a manually operated self-righting mechanism which combined with inversion-proofed engines keeps the lifeboat operational even after capsize. The lifeboat can also be beached in an emergency without causing damage to its engines or steering gear.

The Atlantic 85 which was introduced to the RNLI fleet in 2005 also carries a full suite of communication and electronic navigation aids, as well as a searchlight, night-vision equipment and flares for night-time operations.

Speaking following the arrival of the new lifeboat, Tony McCarth, Lough Ree RNLI Lifeboat Operations Manager said: ‘We are extremely grateful to James Scougall and his incredible fundraising efforts which have funded our new lifeboat. This is a very exciting time for all our volunteers as we enter a new chapter for the RNLI on Lough Ree. We will be building a new permanent Boat House (Lifeboat Station) for the Tara Scougall to call home in the near future.

‘We are looking forward to being the custodians of this new lifeboat which will allow our volunteers to go on to rescue and to save many more lives in the years to come.’

The RNLI is a charity which relies on voluntary contributions and legacies.

Key facts about the RNLI

The RNLI charity saves lives at sea. Its volunteers provide a 24-hour search and rescue service around the United Kingdom and Republic of Ireland coasts. The RNLI operates over 238 lifeboat stations in the UK and Ireland and more than 240 lifeguard units on beaches around the UK and Channel Islands. The RNLI is independent of Coastguard and government and depends on voluntary donations and legacies to maintain its rescue service. Since the RNLI was founded in 1824, its lifeboat crews and lifeguards have saved over 142,700 lives.