Narrative Writing based on the work of Edward Hopper

The 7S boys and Mr Cuyler have recently explored the paintings of American Realist, Edward Hopper, in their English lessons.

His work often depicted empty or isolated spaces (scarily reminiscent of what we are experiencing at present), that exhibited an almost photographic quality. The aim of this task was to encourage boys to develop their interpretive skills and to understand that reality can be interpreted in a myriad of ways. The boys put what they saw in Hopper’s work into words that attempted to capture the moment reflected in their chosen painting. Each boy produced thoughtful and creative written responses (either a poem or a short piece of narrative prose) which they wrote beneath their chosen Hopper artwork.

I commend the whole 7S class for their outstanding work. Here are just a few lovely examples of what the boys produced. 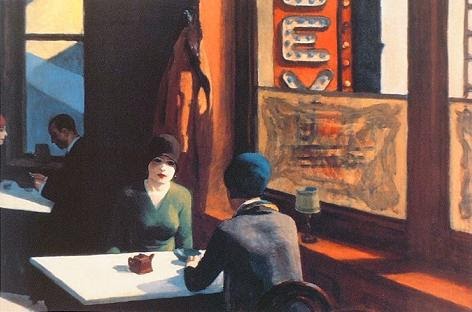 She sentenced me to sit by her side

The atmosphere was frigid and desolate

Her eyes glared through me,

Burning through layers of skin to find the information she truly needed.

As I sat there, fragments of memory came into view

She plunged her hands onto the table-top

A glance of seriousness choked me

I could see what she was getting at.

I overlooked her in a time desperate, lost time

But unsurprisingly it was to her advantage

She was luring me into talking to her.

The world was spinning in solitude

No sounds were being leaked from the air

The awkwardness of this meeting was slowly grasping both of us

But it would not make me talk…

If any conversation started it would not be as a result of her.

Nighthawks – At the Diner by Edward 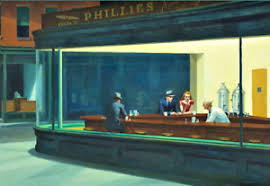 My salesman persona has worn me out.

Feet burning with fatigue and my heart with bitter envy,

As others with loved ones flaunt and taunt me,

Their laughing companionship fuelling my sadness.

Home could be anywhere; 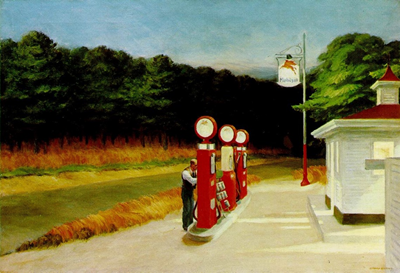 Another day has passed and now a new one has begun. The sun is shining in the sky. Many cars come here because they need fuel. The gas pumps are prepared with petrol, diesel and more. I charge $1.80 per litre of fuel. Whenever I look at the bright red gas pumps, they remind me of those beautiful double-decker buses. I have a small house in the station, not big because I can't afford better. I don’t even own a car, and I work at a gas station!  It’s not so easy to make money on this lowly country road because not many people use this route on their way to the capital. I have many fire extinguishers just in case one of the pumps bursts into flame.

My biggest dream is to become rich and to live in a top floor apartment in New York. But from where I stand right now, I doubt I’ll ever get close. Now, I'm just waiting by a pump, waiting for someone to come by. I get quite lonely, standing here all day. Sometime soon somebody will replace me and I'll need to find a new place to live and earn money. What will I do next? I don’t know. You may think that standing by the pumps, filling up cars would give me a sense of imagination. No… whenever I ponder on what I might do after this, I can only think of gas pumps and cars. I guess this is what I was made for - spending my time on a country road watching cars fly by like birds migrating when the winter comes.