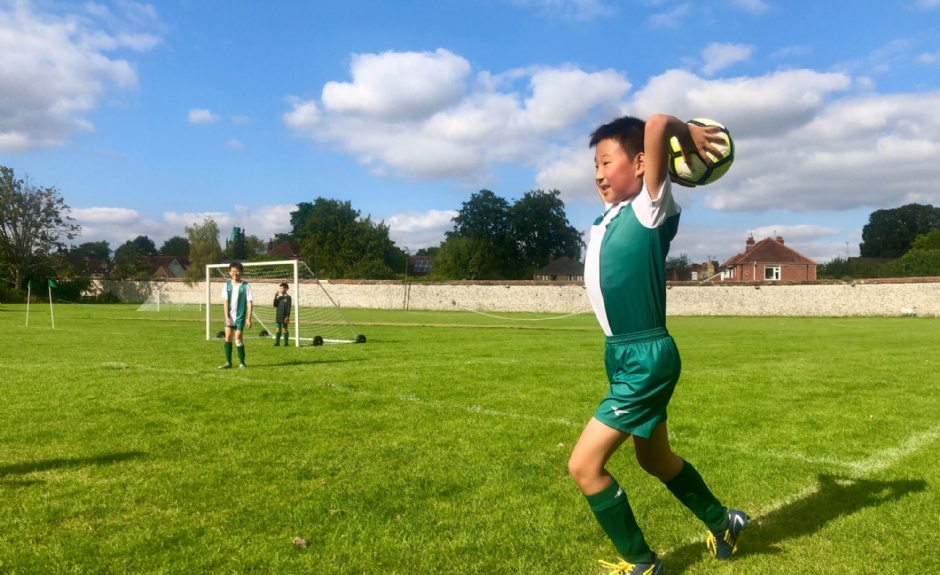 Foals A Stroud Tournament at Wellington Lane
The Foals went into the tournament full of excitement but got off to a slow start with a 0-0 draw against Stroud in a game they really should have won. The next match saw a deserved 1-0 win over Walhampton - William S scoring the winning goal. Missed chances in the third match saw another draw with Springhill 0-0. Finally, a 0-4 loss to Twyford meant the boys did not progress into the main cup.

Into the plate competition, Pilgrims' took a narrow 1-0 win against Walhampton B with a goal in the final seconds from Chenhan Z to progress to the final, but a tough game here saw the boys come up short with a 2-0 loss.

Ennis Z was once again the standout performer on the day, along with some fine football from William S. The boys can be pleased with the start they have made this season. Well done, chaps. JB

On Saturday, the Pilgrims’ U9 Rovers lost out in a close fought encounter against Twyford. A tentative start saw Twyford take control early on, scoring two well-taken goals through no fault of our own. This shook the U9s into action, and as the first half progressed, they gained the upper hand. For all this increased pressure, the U9s were unable to convert any chances. At half-time the scored remained 0-2 to Twyford.

The second half was a completely different story. Pilgrims’ U9 Rovers dominated from start to finish, with Christian B rounding off a superb move by firing into the bottom corner. With spirits up, all the boys put in 100% effort to try and force an equaliser. Despite numerous attempts, that all important second goal did not materialise and the game finished with Pilgrims' 1-2 Twyford. On another day Pilgrims' would have been victorious, but it was not to be.

This was a superb team performance, with some outstanding football being played at times. Continued focus on positional play is needed to make it easier for us to pass the ball into space and maintain the emphasis on attacking. All the boys contributed, and they should be proud of their efforts. Barney S and Patrick B linked up well and were the driving force when attacking. Special mention must be given to Archie W, as his positioning, strength in the tackle, and distribution demonstrated that he has all the qualities of a very good centre half. Well done, boys; lots of positives for us to build on. TMH

This was a match of high drama, unbearable tension, and three penalties. On a big pitch in the late autumn sun, Twyford away as our first match of the season had the potential to be a tricky fixture. However, the simple truth is that Pilgrims' could (and probably should) have been out of sight after about 3 minutes, Dominic K-S crossing invitingly after about 30 seconds for our first gilt-edged chance, before two more came and went. Pilgrims' were then awarded our first penalty, which Archie C struck well, but the Twyford keeper guessed right and made a good save. With the scores level at half-time, a reminder to take our chances or face the consequences was the key message, and despite going a goal down against the run of play, Archie C finally put one away to level things up with about 15 minutes to go. Rory K was immense throughout and K-S's fearless running ended up with him being upended in the box for penalty number 2! Otto G stepped up but rolled it agonisingly wide of the post. It wasn't to be our day; heads didn't drop, but energy levels waned towards the end and Twyford struck on the break to lead with 5 to go, before a penalty of their own gave the scoreline a gloss that took the shine off an otherwise dominant Pilgrims' performance.

However, goals are the only currency that matter in football and in truth, we were just too wasteful. There were impressive performances everywhere which bodes very well for the future. A bit of a choker to take, but one to learn from! Excellent attitude, spirit and performance - well done to all.  WD

Colts A vs Twyford

Pilgrims' faced a strong Twyford side at the weekend. The fixture was well-balanced throughout, with both sides having opportunities to take the game away from their opposition. Pilgrims' looked comfortable in the first half, maintaining possession of the ball and defending well. Pilgrims' kept their shape but lacked the end product in the final third. Twyford utilised the space in the wide areas and put a number of good balls in the box. Twyford took the lead before the end of the half, but it was Pilgrims' who grew back into the game during the second. Orlando S was on the end of our well-deserved goal. Unfortunately, despite applying pressure in the final moments, an equaliser did not come. A great team performance, and some encouraging signs for the rest of the season. MTG

What stood out in this set of matches was not the fourteen goals scored, although Alex’s W’s four goals are certainly noteworthy; it was the spirit in which the matches were played.  All three teams worked hard, covered a good amount of the pitch, and most importantly, they enjoyed themselves.  All three matches were close at half-time, but Stroud were able to push forward and convert their opportunities better than the Pilgrims’ players could.  Aside from the prolific and industrious Alex W, there were also some strong performances from Daniel D in defence, Cameron J in goal, and the effort of both Lucas B and George S should not be overlooked.  This was a brilliant example of all-inclusive football at its best. AA

The 4ths divided their considerable assets to field two 7-a-side teams against Stroud. After taking the lead through Felix M, the Panthers paid the price for defensive hesitancy as Stroud equalised. Despite creating many more opportunities than the opposition, they couldn't quite force the winner.

In the second game, our two sides played each other with the Pangolins dominating the majority of play. William C grabbed a brace before Cyrus T belted in a consolation goal for the Panthers.

The remaining game against Stroud was won emphatically, 5-0, by the rampant Pangolins. Gabriel D and William C both got a brace with Raffy C joining the party late on with a fifth goal. Special mention must go to Harry H for his tireless work setting up at least three of the goals scored by his team on very enjoyable afternoon. Well done, the Mighty Fourths. AW