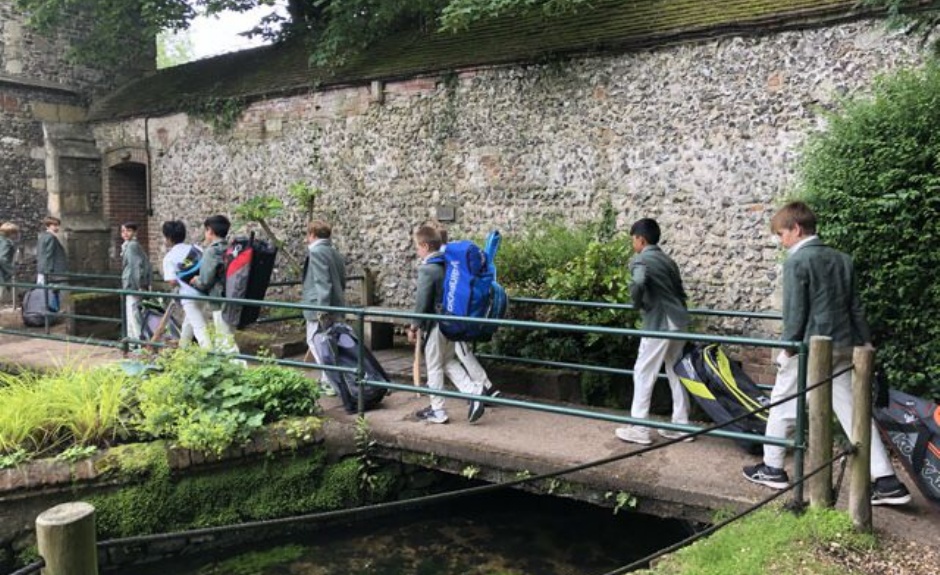 The hosts opted to bat on what looked like a really good wicket, and didn’t lose their first wicket until the twelfth over. Our bowling group did a great job in restricting the openers to a run rate of 4.5 per over. Ben H 1-8 and Ollie J 1-13 from their respective four overs were the pick. Horris Hill never really got away despite having wickets in hand, they weren’t allowed to accelerate by the tight bowling and fielding. We were set 104 to win from our 20 overs. With the wicket still playing true James K filled his boots as he punished any loose bowling with sumptuous strokeplay and placement making an unbeaten 70 before being retired. Ben H (13*) dropped anchor at the other end and manipulated the bowling to give James as much strike as possible. Two very contrasting innings! Seb K hit the winning runs as Pilgrims’ completed a thumping 10 wicket win with three overs to spare. A very satisfying afternoon in the sun.  AW

Pilgrims' won the toss and elected to field. The hosts looked good with the bat in hand but William B-D broke the opening partnership in the fourth over. Nevertheless, Horris' batsmen played with abandon, hitting some big boundaries. Alfie G-H took a catch in the covers from the bowling of Zain N. The wickets never really came frequently enough, although Gerald A-A's bowling put the Horris team under some sustained pressure. He was rewarded with two wickets for his efforts.

In reply, Pilgrims' were under pressure from the off, suffering a couple of early wickets. The run rate set by Horris, at around nine an over, put pressure on the Pilgrims' batsman to seek the runs which resulted in a series of run outs. There were several Pilgrims' boundaries, Wilson T, in particular, enjoying his spell at the crease.  Despite the loss, it was an enjoyable afternoon of cricket. AJS

A very comfortable victory this one.  Horris Hill won the toss and elected to bat.  Some superb bowling, particularly from Laurie S (6 for 3) and Hugo S (3 for 1) from their three overs saw Horris restricted to 29 for 6 at the end of the 12th over.  This allowed us to share the bowling around with a bit of (dangerous) leg spin from Teddy McS, and a nice couple of overs from Harrison K.  Teddy McS was the star in the field with two stunning catches and some good fielding too.  The Horris tail batted nicely though to hold us out, but a total of 45 was never going to be enough.  Indeed, Pilgrims’ were in a hurry in their reply and got the total in five overs and one ball, with Ollie M particularly destructive hitting 33 retired off only 11 balls!  A very good performance by the boys; well done. AD

We could not have wished for better conditions in which to play the penultimate cricket match of season for the U12B’s. The team: fired up. The opposition: Horris Hill. The Pilgrims' boys elected to bat first after winning the toss, and Jinmo K had a marvellous innings. He scored a very impressive 50 runs, which included 10 fours. His partner, Gabriel O, played an excellent anchoring role, scoring 33 before being run out in the last over. Freddie D impressed with some excellent running between the wickets and scored 6 runs off the bat. Pilgrims' managed to amass 123 runs off their 16 overs; some loose bowling from the opposition contributing to the scoreboard significantly. The Pilgrims' boys bowled beautifully, and some disciplined, accurate bowling was the order of the day. They managed to restrict Horris Hill to 23 runs for the loss of 9 wickets. It was wonderful for the U12B’s to back up last week's win with another - it has done their confidence a lot of good. Congratulations to these boys for a game well played. CC

It is rare, but not impossible, after merely 12 balls of a cricket match, that a result seems inevitable.  This was the case on Wednesday when Horris Hill were 0-4 from 2 overs (akin to the vidiprinter, when a team scores 7 goals (SEVEN!), that is 4 wickets lost for 0 runs!). This provided the excellent opportunity for each Pilgrims’ bowler to bowl two overs each, with our leading wicket takers of the season able to try some spin bowling.  Some generous umpiring allowed Horris to build a score to defend; however, Mr Extras top scored for Horris with 25!  In reply, the Pilgrims’ batters had 25 balls each to face (including extras) before they were retired.  Again, this provided a good rotation of personnel, allowing most of the team the opportunity to contribute. AA

Our Year 7s were given a real contest today against a competent side of mainly Year 8 boys from Stroud School. Batting first we stuttered along being made to work really hard against accurate bowling and a slow outfield. No batsman scored more than 14 as we progressed to 112-6 after our 20 overs. I thought that we were 15 to 20 runs shy of a winning total and that the boys would have to bowl extremely well to contain Stroud after the break. Positive batting, with some really sharp running between the wickets, was the hallmark of Stroud’s innings. They were comfortably up with the run rate after 10 overs but had lost five wickets. The outcome of matches can swing quickly and it appeared that Stroud had grasped the initiative in two very high scoring overs with their number six striking the ball all round the park. Pilgrims’ held their nerve and continued to bowl excellent lines and were rewarded by removing the dangerous batsmen and forcing an error from the other established batsmen to wrestle the initiate back into their favour. Applying more pressure with lively fielding and assured bowling Pilgrims’ significantly stemmed the flow of runs in the next five overs and had effectively closed Stroud out by the eighteenth over. Needing 24 from the final two overs, eight wickets down Stroud managed to get 101-9 leaving them 11 runs short. No real outstanding performances today; it was more of a total team effort with every player contributing well. AW

On Wednesday, we welcomed Stroud back for our second fixture, keen to build on an impressive last outing against Horris Hill. Stroud won the toss and elected to bat. Having lost a frontline attack of Nikhil D, Felix C and Ollie R, we needed to make a positive early start. However, Stroud settled quickly and made a bright start, with the opening pair going along nicely. Some good fielding removed one, and Ray C bowled nicely to bring us back into contention, taking their number 3's top of middle and off stump out. Thereafter, wickets fell regularly, however, we were hampered by some wayward bowling at times and our extras column made for some uncomfortable viewing! Needing 92 to win, Alex B got out softly despite good form in training before Jinmo K and Gabriel O hit the ball everywhere in an enterprising partnership of 59 before Gabriel missed a straight one. The run rate slowed then but we still had enough to get home comfortably, with Ben H cutting gloriously for 4 being a noticeable highlight of the afternoon. Well done to all the boys, a fantastic way to end a really promising season. WD

One of the limitations of the Colts A’s batting this season has been their comparatively slow run-rate. Safe in the knowledge we were stronger on paper allowed us to continue with a format which worked very well last week – giving our batsmen a twenty-ball innings. It was interesting to see how this changed the approach of our batsmen and made them more aggressive and keen to score. However, as has happened in recent matches, extras conceded by Stroud far outweighed any notable Pilgrims’ batting contribution. Pilgrims' bowled too short on an unpredictable pitch, but Stroud found it even more difficult to accumulate many runs. It was pleasing to end the season with a victory. AA

In the final game of the season, Colts B were outstanding. Stroud batted first. They were in for quite a surprise with the quality of Pilgrims' bowling. Gabriel D, Joe W and William C gave them a torrid time with accurate line and length. Later, Seb N pinned them back with two almost totally dry overs. Coming into bat, Pilgrims' did so with grace and determination. Stroud bowled well. They had a mixture of medium pace and spin, but none of it was going to put the Colts B off their stride. Timothee H, Michael Z and, once again, Seb N were knocking the ball for fours and sixes all over the place! Well done, Pilgrims'. An excellent end to the season. PB