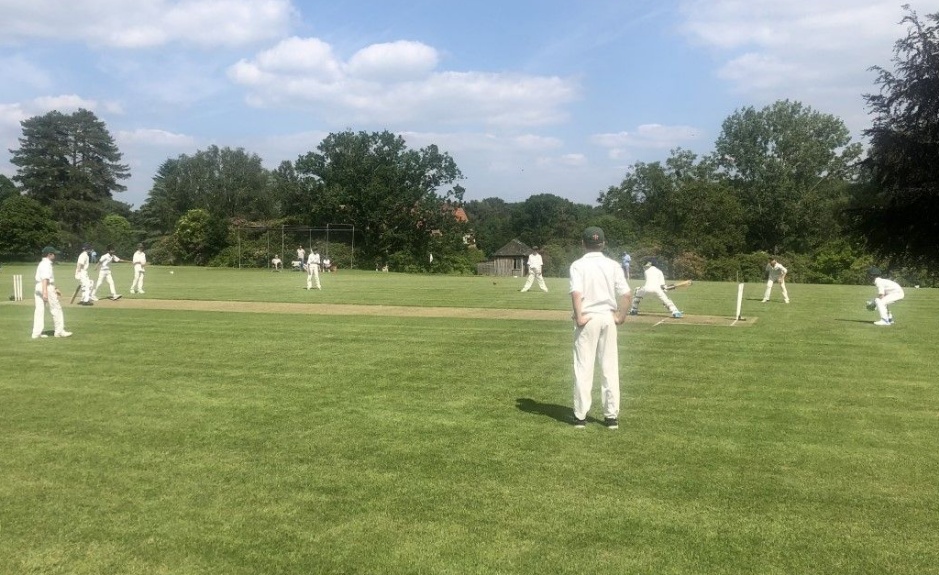 This was a superb all-round performance from the boys against a decent team.  Winning the toss and electing to bat, the pressure was on to set a challenging total.  With Ollie M (28) batting fluently and Henry S (15) anchoring the innings with some solid batting, it looked like a big total might be on the cards.  However, after two quick wickets, and then Henry getting out too, we looked in a bit of trouble at 68–4 with only 4 overs to go.  However, some excellent hitting from Guy P (21) and Teddy M (11) got us up to 100.  With a good score, but not a great one, to defend, we really needed to produce in the field, and boy did the boys come through.  Excellent tight bowling, and superb fielding meant that Farleigh were always behind the run rate.  It helped that wickets fell regularly, and Ollie M (2-10) and George C (3-13) were especially miserly and dangerous.  Indeed, it was a double wicket maiden from George in the 18th over which really sealed it, shutting out any chance Farleigh had for victory.  A superb performance and one of which this coach was extremely proud. ASD

On another glorious day for cricket, we welcomed Farleigh to St Cross, historically, quite a difficult fixture for Pilgrims'. Farleigh won the toss and elected to bat. Dutta bowled with some real menace and was rewarded with two wickets from his two overs, and was well supported by Felix C. Wickets fell regularly, Alex B bowled particularly well for his three wickets and Ray C held on to a steepler, over his shoulder, running backwards, looking into the sun! At the end of the innings, we felt happy with our efforts, but we've been in this position before yet failed to chase an achievable target. After an (inspirational) team talk about the merits of playing straight when necessary and looking to score through the shorter leg side boundary when the chance presented, Alex B and Jinmo K strolled out to get us underway. Alex B pulled gloriously for 4 off his first ball, then missed a straight one and was bowled. Uh oh. That brought Gabriel O to the crease, and both he and Jinmo K delivered a masterclass of sorts, punishing the bad balls, peppering the leg side boundary and both retiring out on 32, to record another well deserved win. An excellent team effort and great to notch up another victory with one game to go. Well done!  WD

Winning the toss and choosing to bat is always a positive signal of intent to the opposition. However, with the score 18-5 within five overs, one might have been forgiven for thinking the Colts A were having a bet on who can get out the quickest! As the overs passed, Pilgrims’ managed to eke out some valuable runs, but defending fifty was always going to be a tall order. As it turned out, this was a match of two bowling teams trying to score runs, and it is testament to all those who bowled for Pilgrims’ that this match went into the sixteenth over. On another day, Pilgrims’ should have scored at least another twenty runs and won this match, but the boys need to be more ruthless with the bat, as they are with the ball.  AA

The match against Farleigh was meant to be the most evenly contested game of the season so far; however, there were many dear lessons in it for our boys. Farleigh won the toss and sent the Pilgrims' boys in to bat. The wicket of Timothee H fell early on in the innings, soon followed by the wicket of Seb N. Alex A and William C steadied the ship for Pilgrims', making 11 and 18 runs respectively. Both boys batted with some urgency and struck two beautiful fours each. The rest of the batting line-up struggled on the day, and the biggest scorer of runs for Pilgrims' was 'Extras'. The scoreboard read 125-7 at the end of the Pilgrims' innings. The lessons taken from this fixture came at the expense of the bowlers. Far too many wides and no balls allowed Farleigh to rack up runs without having to exert too much effort. A few missed catches and a somewhat relaxed approach in the field also contributed to the steady run rate, and Farleigh reached 127-3 in 17 overs. Farleigh won the match by 7 wickets. The game was a steep learning curve for the Colts B’s, but I am sure a lot of growth will come from it. CC

Some very skilful batting in the first five overs saw Farleigh race to 55-1. They continued to accumulate runs at a decent rate despite Aditya S taking 3-13 in his fine four over spell. We were pretty inconsistent with our bowling line and gave away 37 extras. Farleigh continued their momentum, and although we took seven wickets we couldn’t stem the flow of runs as they set us a massive 163 to win. We were 60 all out as we capitulated with some very naive decision-making when running between the wickets – three run-outs!  Best tuck this one away and look forward to the next match.  AW

In the last fixture of the term, Pilgrims' were keen to finish on a high, and that, despite the score line, is exactly what they did. Eight wickets taken against the best team we have played is something to be very proud of. Our best this season! Farleigh, despite losing eight wickets from some impressive bowling from Pilgrims' still scored 334 runs, an indication to how strong they are. This season has seen a pattern throughout all our matches; fantastic bowling and fielding but struggling to score runs. The boys can be pleased with their progression and have enjoyed playing, despite the results.  JB

With some strong opening batting from the Farleigh squad, the Pilgrims’ fielders initially struggled to prevent balls from reaching the boundary. However, under the skilled captaincy of Ike C, they improved their form and communication to ease the number of runs and took a few wickets. Zain C had a notable bowling performance, getting two wickets in one over and James B should also be commended for his bowling accuracy and consistency. The Bears' batting was in good shape with some long-range hits leading to a few 4’s and one 6. Unfortunately, the opposition had been practising their catching, with most of our wickets coming from caught-outs. Not our day in the end, but the boys had a good afternoon away in the sunshine. KN

U9 Hawks v Farleigh  Away

I was really impressed with Pilgrims’ attitude to the game this week. We were up against a strong Farleigh side who batted sensibly. We fielded really well in the deep, Jacob H and Bertie B putting their bodies on the line to stop boundaries. Unfortunately we only picked up two wickets, so struggled to stem the run flow. We batted superbly, Charles N and Rian D were on the offensive, picking off the bad ball and putting it away for four! Charles and Jacob put on 43 runs in their partnership, and didn’t lose a wicket. A strong finish to the season. I wish all the boys good luck next season! Thank you for your hard work and commitment this term. MTG